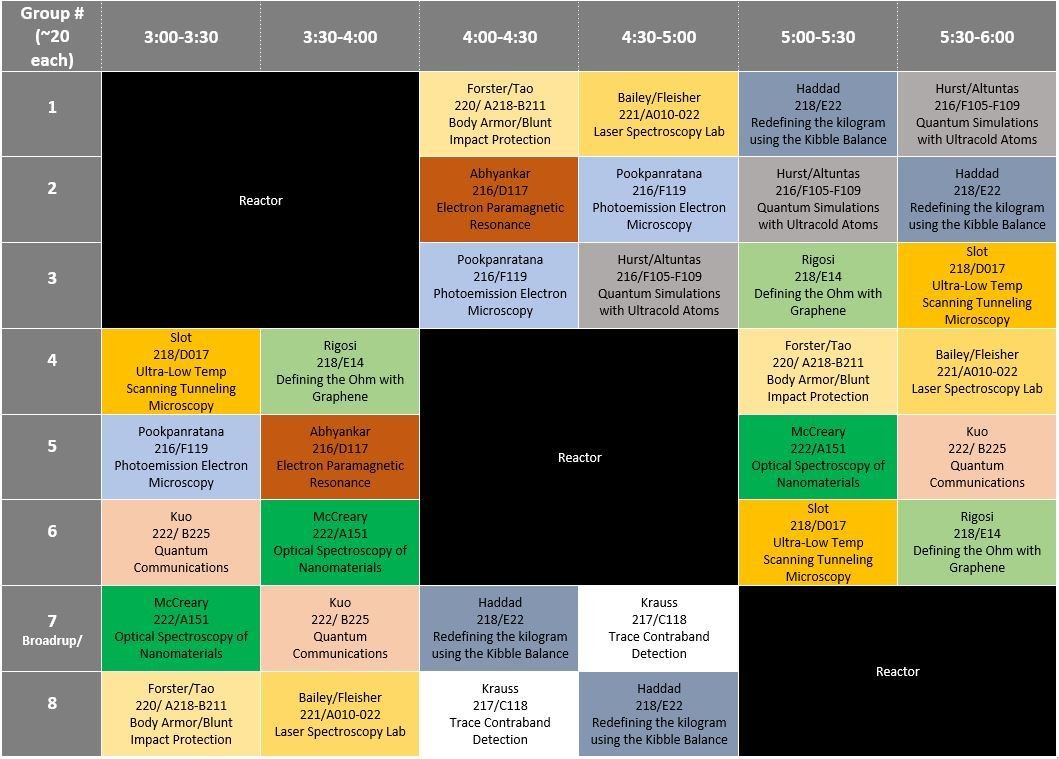 Photoemission Electron Microscopy (PEEM) Lab: The PEEM instrument images electrons from solid state materials which then provides an image of the material surface due to topographic and electronic contrast. The technique uses photons in the ultraviolet regime to eject electrons from a material. These electrons are then accelerated into an imaging column and steered using electrostatic and magnetic electron optics. Within the same instrument, we can obtain a real space image of the surface and a momentum space image of its electronic band structure (aka micro-angle resolved photoemission). The electronic properties of a material define how a material will be used in an electronic device.

Trace Contraband Detection: In the last decade, there has been an unprecedented deployment of systems for detection of trace explosives and drugs to support homeland security in the United States and around the world. Working with the Department of Homeland Security and other organizations, NIST is developing a measurement science and standards infrastructure to support this effort to help ensure that the devices that are deployed in airports, embassies and other facilities work as expected. This will be a walking tour that highlights several ongoing activities at NIST that support a large effort in trace contraband detection.

Redefining the Kilogram Using the Kibble Balance: For more than a century, the kilogram (kg) — the fundamental unit of mass in the International System of Units (SI) — has been defined as exactly equal to the mass of a small polished cylinder, cast in 1879 of platinum and iridium. With the redefinition of the SI that happened in 2019, the unit of mass is now realized based on three fundamental reference constants: the Planck constant h, the speed of light c, and the unperturbed ground state hyperfine transition frequency of the cesium 133 atom. NIST’s Kibble balance is now in its 4th generation (NIST-4). NIST-4 began full operation in early 2016, and was designed to measure the Planck constant and to satisfy the exacting measurement requirements that must be met in order to redefine the kilogram.”

Electron Paramagnetic Resonance: Paramagnetic materials contain unpaired electrons, which gives them a magnetic moment. When such materials are placed in a magnetic field, they can resonantly absorb microwaves of certain frequencies. The associated spectroscopic technique, electron paramagnetic resonance (EPR) spectroscopy, can provide atomic-level information about the local environment of such paramagnetic materials. The Szalai lab works on broadening the applications and increasing the sensitivity of EPR spectroscopy. It houses a commercial 9 GHz EPR spectrometer and a homebuilt state-of-the-art 35 GHz spectrometer, which are used to probe a wide variety of materials from biomacromolecules to condensed matter systems such as transition metal oxides.

Laser Spectroscopy lab: In the era of a rapidly changing climate, it is crucial to develop tools that can accurately and precisely interrogate gases such as CO2, N2O, O2, and many more. Our group uses single frequency lasers and optical frequency combs to perform high-resolution spectroscopy of these target molecules. Whether it is characterizing molecules to support NASA’s OCO-2 mission, advancing optical measurement of radiocarbon, or pushing the boundaries for N2O isotope characterization, the work done in our lab directly impacts the advancement of atmospheric science.

Quantum Communications and Networking lab: Our lab uses photons to study quantum entanglement, its effects and applications. We investigate entangled photon sources, methods to preserve and distribute entanglement over a network, and how entanglement can be used for quantum-enhanced sensing.

Body Armor and Blunt Impact Protection lab: Nearly all of the civilian body armor used in the United States has been certified to comply with the requirements of the body armor standards drafted by NIST. On this tour, visitors will learn about how body armor is tested, learn about the importance of blunt impact protection, and learn more about research activities that lead to recommendations improvements in protective materials design.

The Era of Quantum Units - Defining Electrical Resistance With Graphene:  On May 20, 2019 the “base” units of measurement in SI (the modern metric system) were redefined, and other units that are derived from them were also affected.  Though the redefinition of the kilogram is getting the most publicity, this global decision also includes all of the common electrical units, such as the ampere (the base unit), the volt, and the ohm. This tour stop will be about the ohm and how we define it using a phenomena called the quantum Hall effect.

Ultra-Low Temp. Scanning Tunneling Microscopy (STM) lab:   A scanning tunneling microscope (STM) is a powerful tool to image and manipulate electronic materials, molecules and atoms with atomic precision. An atomically sharp tip scans a sample and can ‘feel’ atoms on the surface based on the principle of quantum tunneling. Moreover, the tip can move individual atoms around. This not only provides insight into novel electronic materials such as superconductors, but also allows to change their properties in a controlled way. In the NIST-STM lab, exceptional resolutions are achieved at an ultra-low temperature of 10 mK and high magnetic fields of 15 T.

Optical Spectroscopy of Nanomaterials:  Ever since the discovery of graphene, a single atomic sheet of carbon atoms, was discovered in 2004 using scotch tape (and went on to win the Nobel prize), there has been a plethora of research dedicated to atomically thin materials. In our lab, we combine laser light with magnetic fields, electric fields, and cold temperatures to probe a variety of properties of these materials, including vibrations and magnetism, as well as more exotic phenomena such as charge density waves and spin waves.